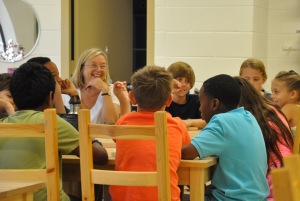 I raced to beat the movie release of The Giver, starting a book club with students as soon as school took up last August. Ten chose to participate. Discussing the book previously with upper elementary students had convinced me of its relevance to them.  I was further inspired listening to Lois Lowry talk about the Giver books at the Tucson Book Fair last spring. She characterized The Giver as the struggle between conformity and resistance, a theme that some of the students articulated as they began to understand the book.  Others often sketched how they imagined the physical setting or talked skeptically about a world without choice.  At the first meeting one student had found the word dystopian on the back cover and defined it as the opposite of utopia.  We spent much of that first session exploring the antonyms, which were often used in subsequent discussions.  Students brought thoughtful questions to every meeting and offered surprising insights.  Our discussions reminded me how great literature can transform the thinking of young readers.  The Giver offers many themes to be explored, and each student found a different way of creating meaning from the story.  The book reports they wrote at the end reflected a wide range of understandings and insights.

As we concluded our discussions of The Giver, one of the older boys proposed we read The Maze Runner, another book title being promoted because of the upcoming movie.  I agreed without reading it because I was so impressed by his enthusiasm.  When I began the book I was disgusted by the coarse language, but gradually I have come to appreciate some of the themes developed through the characters’ daring and interactions.  All the members of this book club are male, and it is indeed a boys’ story through and through.  In that regard, it has truly engaged several reluctant readers who have impressed me with the depth of their analysis. In the end it is seems to be a shallow story with lots of sensational action, but one with potential to excite new fiction readers.

I don’t think I’ll go see either of the movies.  Even the movie version of “The Hunger Games” spoiled what I thought was, at best, a sensationalized thriller. Great literature is almost always spoiled for me by someone’s cinematic idea of it.  However, I have to admit movies have served to whet the interests of my students, and anything that gets them excited about reading has merit.  The contrast for me between the rich conversations about The Giver and the much shallower discussions of The Maze Runner is a reminder to follow every avenue that brings our students into contact with reading, but also to find ways of introducing some of the great new literature being written for them these days.