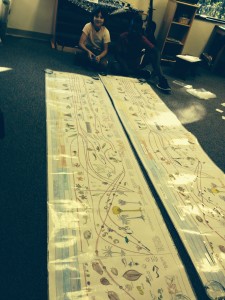 Throughout my book The Romance of Teaching I have sketched the outlines and presentations of many lessons associated with the Montessori elementary program. Experienced teachers have told me that they present these lessons in others ways. Teachers who are not familiar with the Montessori curriculum have suggested that the lessons sound interesting, but are too incomplete to be useful.

To address the concerns of both groups, I am offering here transcripts of the Bergamo lectures given during the Montessori Elementary Teacher Training, 1973-74. The lectures were delivered in Italian by Signore Camillo Grazzini and Signora Eleanor Honnegger, then translated sentence by sentence into English by a Mexican woman. I had come to Italy three months before the training course began for the purpose of studying Italian, hoping that it would give me an advantage in the course of study. Indeed, it did. After understanding most of what was said in Italian, I was able to write each sentence down almost word for word while it was being spoken in English. Therefore, I did not really “take notes,” but rather created a “transcript” of the lectures. Each night I went home to type what I had transcribed, using the red ribbon on the typewriter for what I understood would be the actual words and phrases a teacher would use during the lessons. (Often the lectures included lesson demonstrations.)

Perhaps my reference to typing will remind readers how very long ago this was. In the subsequent forty years, the elementary training course has been given many times in many places around the world. Undoubtedly lessons have been revised, improved, and thoughtfully developed. For example, many of the experiments once associated with the first story, the cosmic beginning or Big Bang, are now considered quite dangerous for a classroom. Missing from these files are two lessons now considered fundamental components of Cosmic Education:  The History of Mathematics and The History of our Alphabet.  Both were suggested in the Bergamo course, but neither was formally presented.  In the January chapter of my book, I have described how I presented the History of Math, which I called the History of 1-2-3.

In the files offered here are the lectures I have cherished throughout my teaching career, returning again and again to my albums where they reside to study the details. And whenever I do that and follow through, the lessons go well. Lights of understanding come on in the eyes of my young listeners, and I become once more aware of the power of precise language and deliberate pedagogical actions.

I am aware of many errors in these transcripts. Of course they are my errors, attributable partly to transcribing poorly and also to subsequent lack of scrutiny.

Charts for Fractions and Geometry